I pulled my camera battery out of the charger and glanced out the window. The wind was picking up and the sunshine had all but gone. Not on race day! I ran upstairs, grabbed Jackie and we quickly dismantled the laundry from the clothesline just in time before the rain came through. The weather looked tricky. A couple quick storms and then clear. Would they be racing tonight? I logged into Facebook and sure enough the races were still set to take place, so I grabbed my gear and headed to the track. 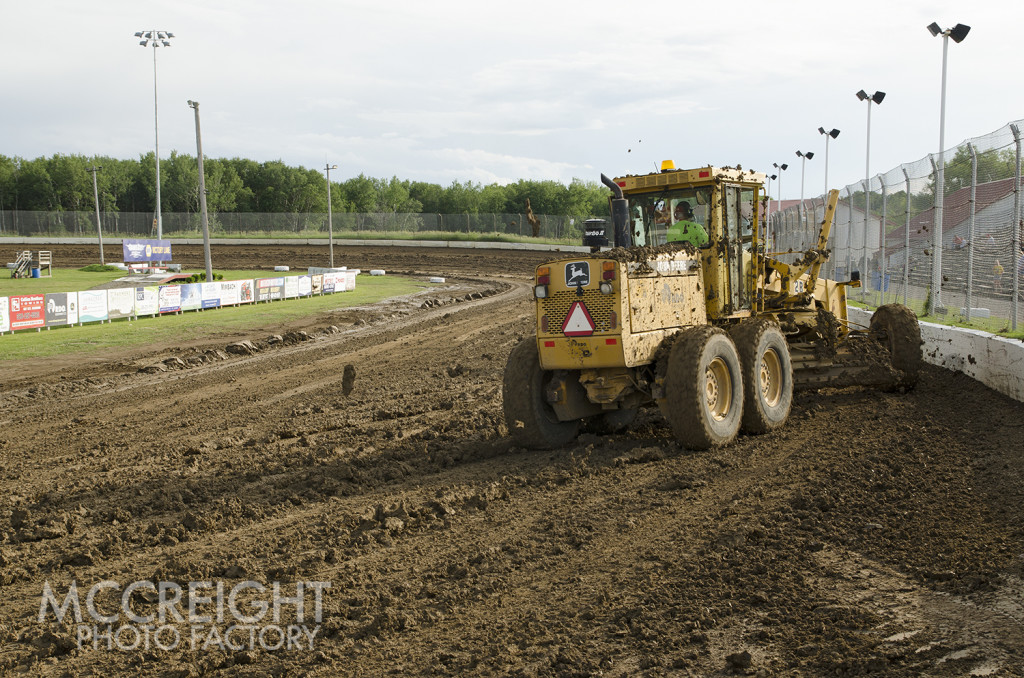 I pull off of Golden Spike road and what a surprise I find. Instead of race cars, there is a road grader sliding out of turn four throwing mud all the way down the front stretch. The track looked pretty bad. Huge clumps of mud and water gushed from the track with every lap. Behind me a hauler was leaving the track. Not a good sign. As I investigated the scene, I saw many drivers in good spirits ready to hit the dirt, or mud. Not only were the track workers hard at it but Mr. Trantina (driver of the 19X Super Stock) was in a 772 Grader making hot laps. It wasn’t long and the track was ready to race.

Eager to get on the track was Shane Howell in his L1 Midwest Mod. After a couple hot laps the track was ready and the racing began.

Tonight was going to be a night of experimental photography. I wanted to try some long exposure shots near 1/5 of a second, along with some new angles. This could mean a lot of failed shots, but I ain’t scared! What was more bothersome than the many blurred worthless shots I was making was the mosquitos! They were hungry for some of my blood, and pretty sure no mosquito went hungry last night. Although many lost their lives to the palm of my hand in their hunt for diner.

After I started to find my groove with the new camera angles and slower shutter speeds, the racing also started to pick up.

After the heats the first group of cars to roll on the track were the Wissota Midwest Modifieds. Always eager to put on a good show they didn’t disappoint. With a dry race surface the drivers hooked it left into turn one and a race broke out. Most of the race was between Tony Schill (8s) and Ryan Studanski (3). The two duked it out while Travis Schulte (3T) sat in 3rd waiting for the right opportunity. That opportunity never opened up and Tony held off the challengers to take the trophy back to his trailer.

Did I step on a beehive? Oh never mind, the hornets are taking the track. The hornets may be the smallest cars on the speedway, but they aren’t afraid to put on a racing clinic. Ashton Schulte (11S) worked his way past Gavin Rowland (18) for the lead. It wasn’t long and Tim Lavoi (40) started making up ground into 2nd place. Brian Riedemann waved the white flag from the flagstand and Ashton caught the tail end of the field bringing Tim into position to battle for the lead. The lap car moved up the track, and Ashton took home the checkers for the first time in his young career.

The Mod Fours hit the dirt and one question was on the fans minds. Can anyone dethrone Keith Thell? Keith has dominated 2015 with 3 straight wins at Granite City Speedway (only 3 races have been ran so far). As the green flag flew it looked as if Andy Mayavski (29) was going to have a shot. Andy led much of the race as Keith struggled to get going. It wasn’t long and Keith was up to speed and battling Andy for the lead. Keith made the pass and Andy ended up stuck in the mud on the inside of turn 2. The green flag flew again and Keith walked home with victory number 4 at GCS.

Here come the Street Stocks! Right off the bat Christina Studanski (95) battled side by side with Davey Kruchten (11K) as Tim Johnson (1JR) tried to make it three wide on the inside. This allowed Christina to pull ahead as Justin Pogones pulled into the battle as well. Tim worked past Christina and after a caution Justin pulled into 2nd. No one was able to challenge Tim again as he rolled into victory lane, quickly had his photo taken by yours truly and hurried back to the trailer to jump into his Super Stock.

Tim’s 1JR Super Stock rolled onto the track to join the field and the races were set. The night was looking good for Denis Czech (2*) until Jake Goetze (26) had an early exit to his night bringing out the caution. As the green flag waved again Tim (1JR) was all over Denis. Denis held Tim off lap after lap until on turn 3 and 4 of the final lap, Tim set Denis up and drove underneath him to pull just ahead at the line. Adding another trophy to the collection, Tim jumped back into his car after photos to prepare for battle with the Wissota Modifieds.

After the first few laps Matt Weisman (11W) was looking strong. It wasn’t long and Don Eischens (9E) who has had a great 2015 so far, was knocking on Matt’s right rear. Don motored ahead with Tim (1JR) following him around Matt. Don kept his distance from Tim and took home another win at GCS.

It was an amazing night at Granite City Speedway, thanks to the track workers and everyone that helped get the track ready to race. The man in charge of the race surface will have his hands full to put the dirt back on the track in preparation for Sunday nights race, but I have a feeling as long as the weather holds off, there will be more great racing on Sunday for Kid’s Night.

See you all there! 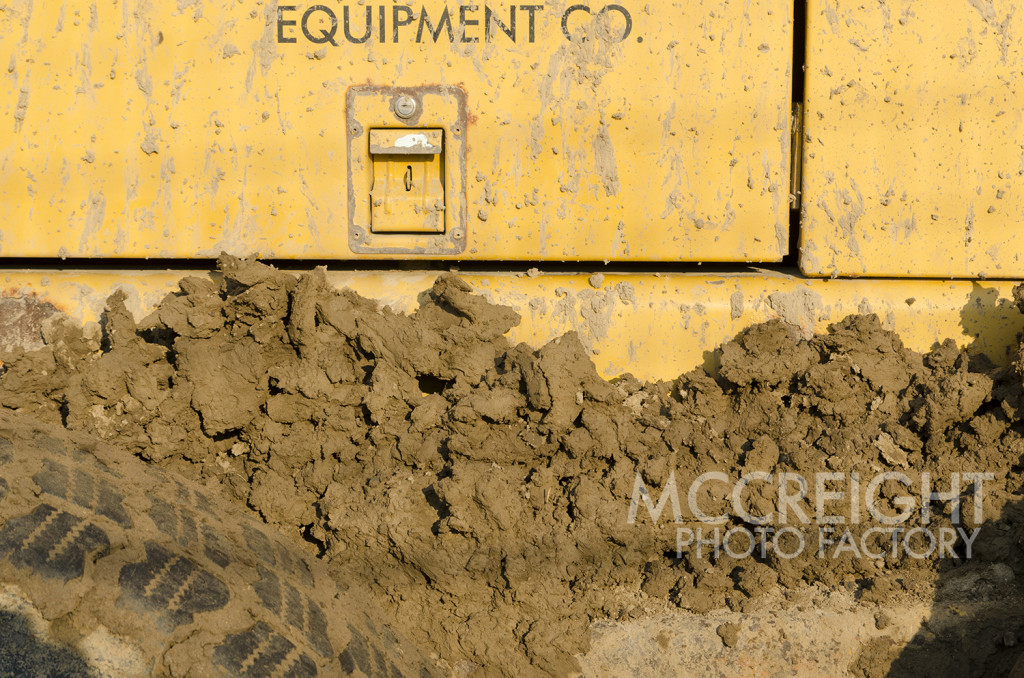 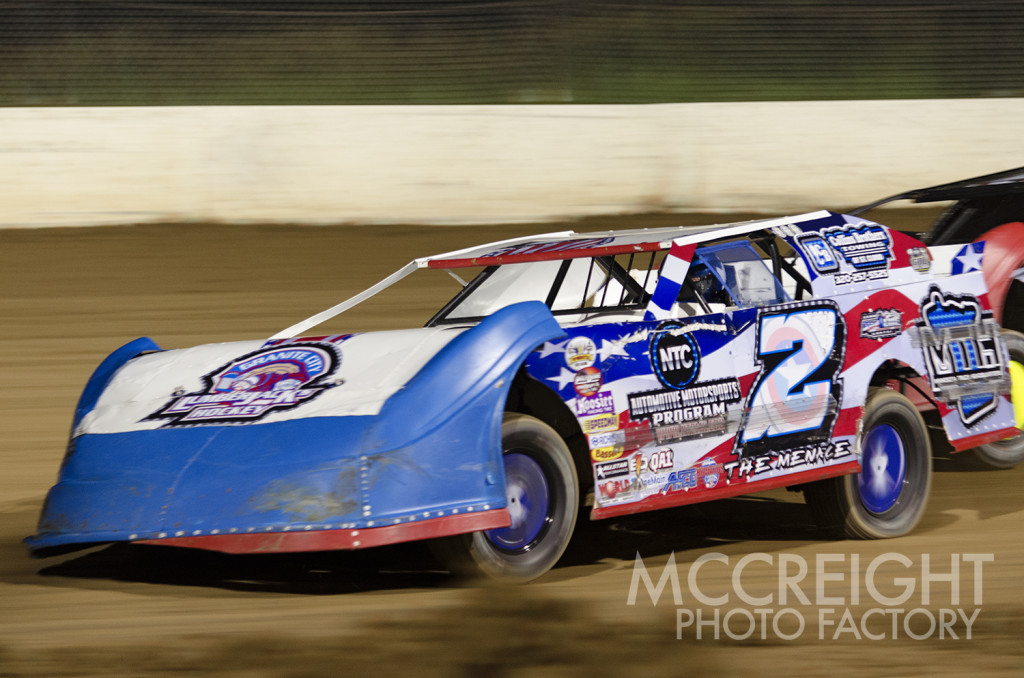 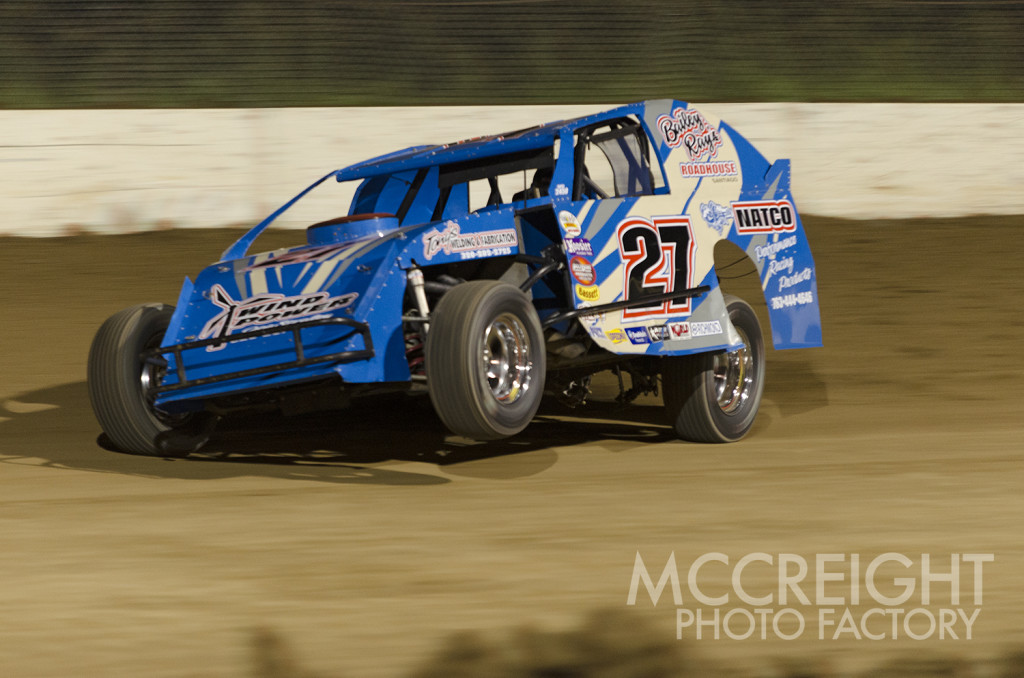