Why do I love this time of year so much? The temps are perfect, the mosquitoes haven’t found their thirst for blood yet, the fans are rowdy and it’s dirt track season!

It has been a couple weeks since our last adventure out at Granite City Speedway. Mother nature finally decided to play nice and the rumble of the cars begins to shake the grandstands. Last time we were here the track was disassembling itself. Chunks of dirt were being ripped out of the track surface as if someone had attached a rototiller to the right rear of each racecar. This week is a different story. The track is back together, a new fence is up, it’s the Midwest Modified Special, and the Outlaw Mini Mods are in town.

As a couple of the Mini Mods roll onto the track, it is easy to discredit them due to their lack of presence in size. But when they flatten the pedal, everyone sits up in their seat. They are fast and the drivers are out for blood (mosquitoes beware)!

Let’s have a conversation about the best race of the night. If you were at the track you already know the Street Stock race made the headlines. Christina Studanski vs. Tim Johnson, vs. Justin Pogones vs. Aaron Johnson. These four were stacked up the entire race. Tim and Christina battled it out side-by-side lap after lap. As Tim worked the inside, Christina held her line. It was obvious someone would have to earn it this weekend. As the two battled up front, Justin, and Aaron stacked up directly behind them for a non-stop four-way battle much of the race. As the white flag flew it was anyone’s race. Tim made a move and Christina held her line. She pushed hard to the finish and finished in P1. The crowd went wild and her family was eager to celebrate with her. It was definitely one of the best races I have ever seen. I think everyone at the track would agree. 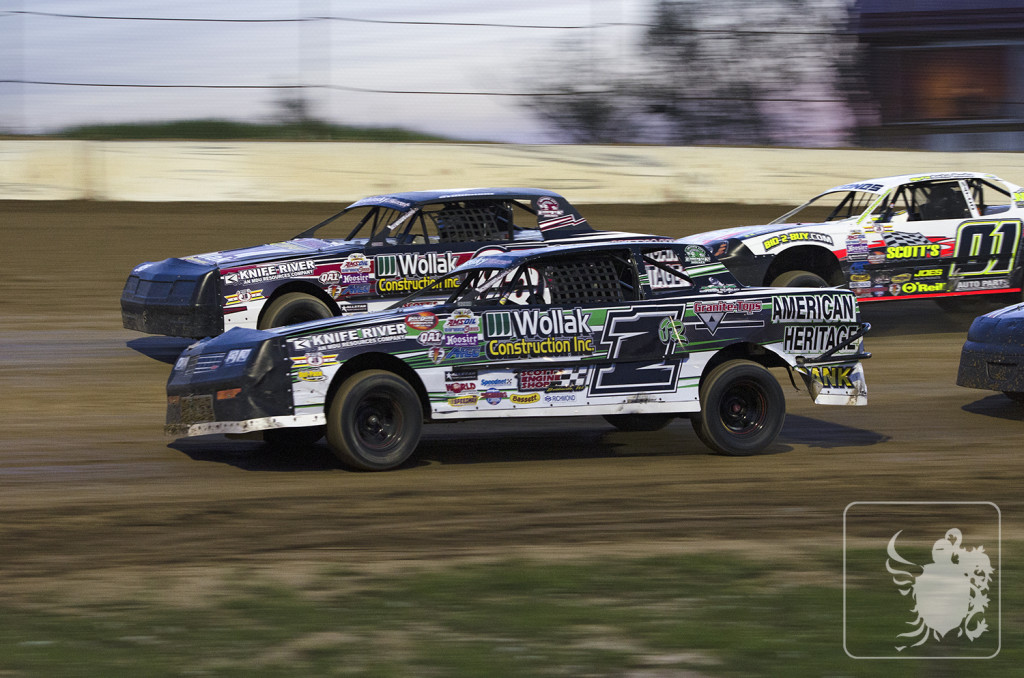 Another great race was between the 3 Hornets that showed up. They didn’t get the memo that they weren’t racing tonight, but with two rainouts in a row, can’t blame them. It was mostly Tim Lavoi up front until he got loose and Travis Swanson made the pass. Tim recovered and raced back to the front to put the #40 car into victory lane.

The Pure Stocks had their opener rained out twice, so they were itching to get back on the track. A familiar face led the pack all night. Charlie Shiek started the season off in first place.

The Mod Fours worked the track and the familiar 00T of Keith Thell got his picture taken in victory lane. He may not have climbed the fence, but he took home the trophy all the same.

Shane Sabraski was the big winner tonight. In both the Midwest Modifieds and the Wissota Modifieds Shane took home the gold. In the Midwest modified race, he kept Denis Czech from making a repeat. During the Wissota race, Shane dominated the entire race. His car was dialed in and he was able to roll to an easy win. The real fun car to watch was as usual, Tim Johnson. Tim threw his car sideways and battled his way all the way up to 2nd before the checkered flag fell.

Did I mention the Mini Mods were in town? They started their assault on the track with a four wide salute to the fans with fireworks above. The racing was rough and tough. They battled ferociously and near the end it looked like #80 Andy Zimmerman was going to be the victor. As the green flag fell with a couple laps to go, I turned around to see Andy’s car smashed up on the backstretch. Nathan Kilwine came around in the #15 car to take the win with Tyler Kaeter in second.

Thanks for checking out this weeks race adventure. If you would like to buy prints from the race, visit the prints page.

See ya next Friday!